The Peace and Security Centre of Competence Sub-Saharan Africa organized on October 31, 2017, a conference on "Media, Jihadists and Counter-Communication Strategy". It follows the first one around the theme "Authorities, Media and Terrorism". Held in Dakar, Senegal, it brought together press representatives from Senegal and Mali, heads of institutions in Senegal, members of subregional and bilateral cooperation organizations, academics specializing in security issues and representatives of African civil society. 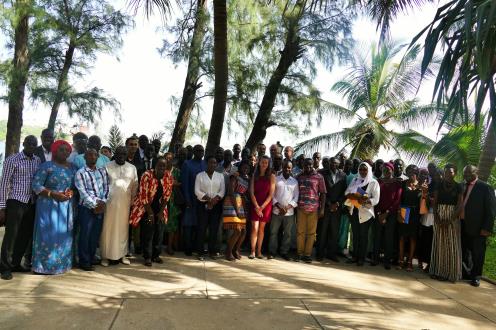 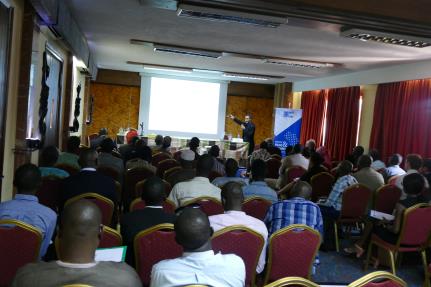 Photo : View of participants during the presentation on the mapping of terrorist media and jihadists or sympathizers.

In his opening remarks at the launch of this day of reflection, his Excellency Mr. Stephan RÖKEN, Ambassador of the Federal Republic of Germany in Senegal has shown that a communication approach is needed instead of a military solution facing to this challenge.

Following him, the Executive Director of Gorée Institue, Mr. Doudou Dia, in his keynote, drew the attention on the media coverage of violent extremism and terrorism. He believes that this hypermediatization contributes to downplay the violence and crime by accentuating the sensationalist tendency. This has implications for the security governance of our countries. He invited media professionals to consider the ethical challenges and dilemmas they face in dealing with such information.

To better understand the jihadist media's mode of communication, the first panel discussion made it possible by mapping the jihadist or sympathetic terrorist media and the rise of new conflicts in Africa and the Middle East. This panel was comprised of Prof. BENLABBAH, Dr. Abdourahmane DIENG expert of ECOWAS and Dr. Mamadou Yaya DIALLO of UCAD. The introduction was made by Prof. Rachid BENLABBAH of the Institute of African Studies of University V (Morocco). Through a presentation resulting from his research on the subject, he showed various jihadist websites that exist, their modes of operation and their targets. These analyzes raised questions and proposals within the hearing that concluded:

The exchanges ended with the last panel, which allowed proposals for a counter-communication strategy. The journalist and expert on security issues, Mrs. Eugénie Rokhaya Aw NDIAYE, following the conclusions of the first issue and the analyzes of the previous speakers, proposed some strategies. Thus, it is necessary to:

The Journalist and Author, Sahelian Specialist Serge DANIEL and Dr. Bakary SAMBE of the Timbuktu Institute have made their proposals more accessible by sharing experiences from the field. The two experts also emphasized their interventions on some strategies such as. The:

At the end of this day, moderated by the journalist and Media Specialist Mrs. Khadidiatou Sophie LY SOW, it became clear that the fight against terrorism and its mode of communication raise many questions in Africa and in the world. The victims of this security challenge are no longer just the people affected by the terrorist attacks, but every citizen. And in the face of such a rise in jihadism that uses all channels of communication to achieve its ultimate goal of terrorizing, we need a real will of our states and an urgency in the implementation of adequate and effective solutions.