The worsening of the security situation in the Sahel, with a range of threats, entangled with each other is a major concern for peace and security. There is therefore a real interweaving of issues, actors, networks in the Sahel for the control of areas where the state is weakly represented in terms of administration and defense and security forces, or almost non-existent. The stabilization and pacification of the Sahel are undeniably challenges to be met. It is in this logic that the Friedrich-Ebert-Stiftung Peace and Security Centre of Competence Sub-Saharan Africa organized from 26 to 28 September 2017, at Ecole de Maintien de la Paix Alioune Blondin Bèye of Bamako (Mali) a workshop of experts to discuss the connection between old and new conflicts and connections between terrorist groups and organized crime networks in the Sahelian area. 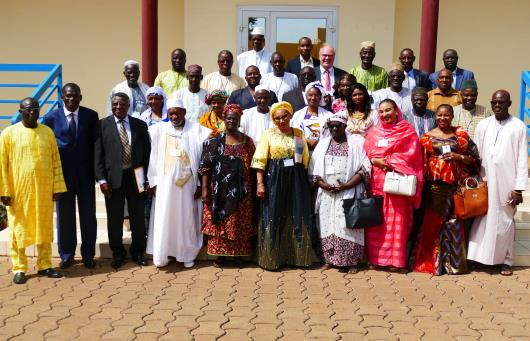 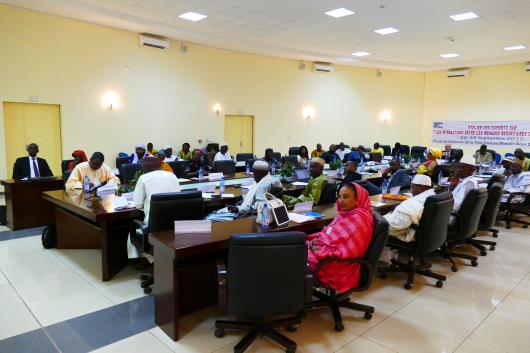 Photo : Participants during the conference

During three days, experts and practitioners from Mali, Niger and Senegal met at Ecole de Maintien de la Paix Alioune Blondin Bèye of Bamako to discuss the interactions between security threats in the Sahel. The Bamako experts' workshop aimed to create a framework for collective, multi-disciplinary and multi-stakeholder reflection in order to positively influence the dynamics of old and new conflicts in the Sahel through the appropriation of the challenges to secure and stabilize this region in the context of asymmetric threats. This consultation framework has made it possible to better analyze the impact of conflicts and their interactions on the security and stability of this region and to propose to national authorities, technical and financial partners, subregional and international institutions the best scenarios for a collective and lasting security in order to stabilize and pacify the Sahel.

Two themes were mainly addressed: the conflicts between farmers and pastoralists in the context of asymmetric threats in Mali and Burkina Faso, on the one hand, and connections between jihadist groups and smuggling networks and illicit trafficking in the Sahel, on the other hand..

Analyses by the expert panel, field actors, representatives of local communities, civil society organizations, state authorities and sub-regional institutions have provided a better understanding of the deep and complex reasons for conflict between farmers and breeders on the one hand and the economic interests that animate the different actors of this conflictuality on the other hand. The recurrence of farmer and pastoralist conflicts crosses the entire Sahel and are justified by the effects of climate change, the frustrations of people born of practices such as land grabbing favored by productivist public policies that favor agriculture over pastoralism translating the inability of decentralization to boost local development. The dynamics of farmer-livestock conflicts in the Niger River Delta and the Soum province of Burkina Faso are also marked by the change in the security context, the upheaval of social equilibria, the development of a crisis economy drugs, smuggling, etc.), the emergence of militias and armed groups, who challenge the state's monopoly of legitimate violence. The lasting resolution of these conflicts requires addressing the political, security and social challenges with a forward-looking vision and the support of technical and financial partners and civil society actors.

From the point of view of the participants, the connections between jihadist groups and networks of smuggling and illicit trafficking in the Sahel can be explained by the conjunction of several factors such as the vulnerability of States, the corruption of certain ruling elites, the porosity of borders, the existence of armed groups that control large areas of the Sahel-Sahara continuum with community roots and their ability to move across large and porous borders; not to mention the important role that Libya plays in this phenomenon. The change of route of cocaine from South America to Europe makes the Sahel, today, a hub in the storage, transit and sale of drugs. The arrival of jihadists in northern Mali from 2004 will give rise to connections between trafficking networks including drugs, cigarettes with terrorist groups. These different entities operating in the same areas where the presence of the State is very weak collaborate through a division of labor: terrorists guarantee the safety of convoys and routes of drug traffickers and in return, they collect "taxes" to finance their terrorist activities in the Sahel. Several testimonies from participants show that the border between terrorism and narco-traffickers in the Sahel is very tenuous, because several jihadists are directly involved in the circulation and drug trafficking as well as several community leaders, and this because of the lucrative value of cocaine. This shows, to the best of its ability, the convergence of interests between the terrorist groups and organized crime networks and smugglers in the Sahel. Participants strongly emphasized the need to focus on the integration of young people into the economic fabric, their schooling and the revitalization of communities to discourage people from joining the criminal networks, which prosper in the Sahel.

Thanks to the contributions of the participants, the connections between the jihadist groups and the various illegal networks in the Sahel were further clarified. In addition, experts and practitioners in the field have made plausible recommendations to Sahelian governments, technical and financial partners, non-state actors and local communities, among them:

At the end of this workshop, the need to establish a collaborative framework of the various stakeholders for lasting peace and security in the Sahelo-Saharan zone (States, populations, armed forces, religious and traditional leaders, etc.) was the main conclusion. And this speaks to the urgency and importance of collective security as a solution to insecurity and instability in sub-Saharan Africa.