On 1st March 2018, the Peace and Security Centre of Competence Sub-Saharan Africa presented studies on the interactions between security threats in the Sahel, respectively on the themes "Conflicts between farmers and herders in a context of asymmetric threats: the case of Mali and Burkina Faso", and "Connections between Jihadist groups and smuggling and illegal trafficking rings in the Sahel". It saw the effective participation of representatives of embassies, Senegalese institutions, civil society, sub-regional and international organizations. The event was also attended by academics, experts and researchers from peace and security research centres and institutes. Similarly, the International Organization for Migration (IOM) was associated with the workshop to gain their perception of these security threats and explore the possibilities for future collaboration. 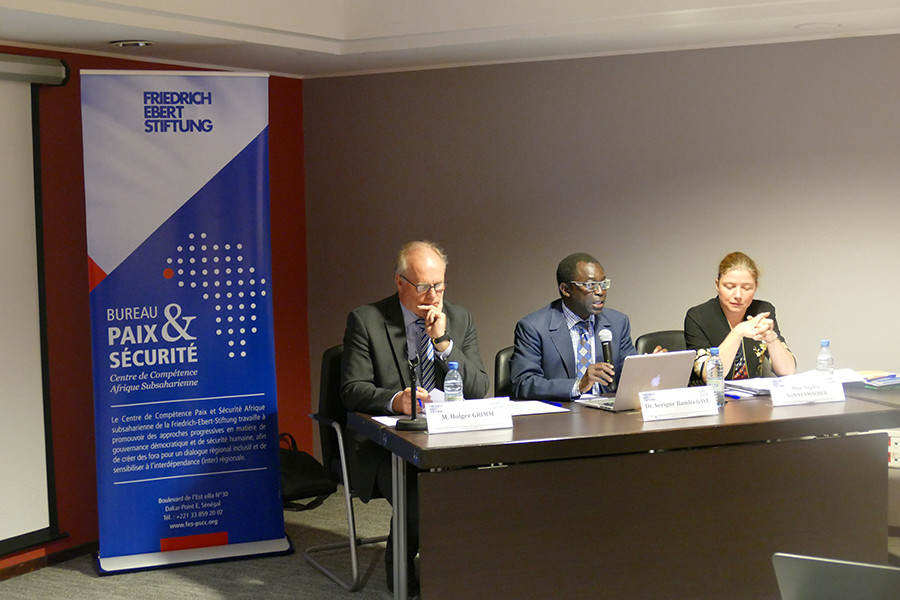 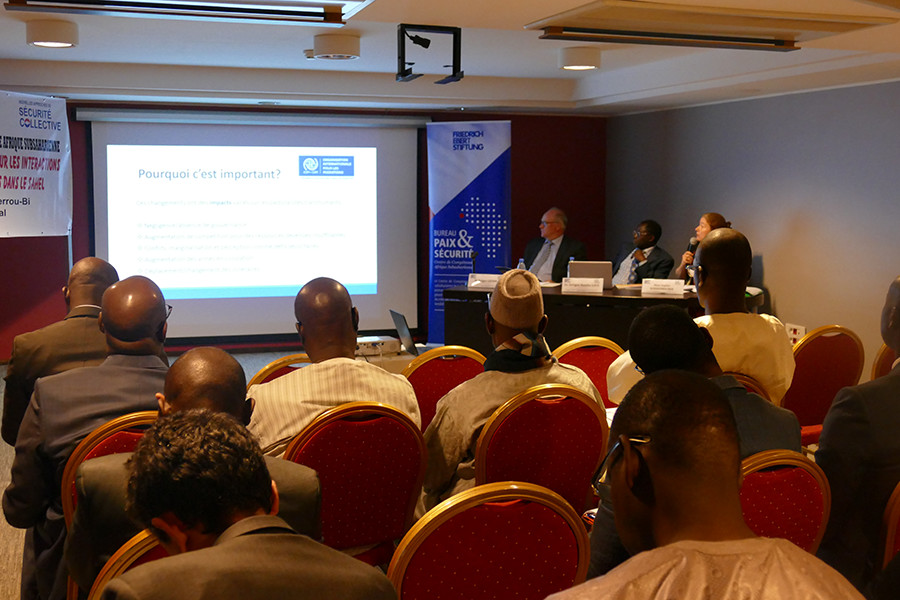 Participants at the presentation workshop

In the Sahel, peace and security are threatened by a multiplicity of increasingly complex causes. The struggle for resources, ethnic tensions, provoked violent (cross-border) conflicts, organized crime, Islamist terrorism and narco-trafficking have contributed to destabilizing the Sahel region and undermining the peace and security of most Sahelian states. This situation exacerbates tensions between communities, such as those between pastoralists and farmers, in a context marked by environmental degradation and the reduction of arable land and grazing areas.

It is in this context that jihadist groups also thrive, which have total or partial control over certain cross-border routes. There is thus a real overlap of stakes, actors and networks in the Sahel for the control of local resources in areas where the State is weakly represented in terms of administration, investments and defence and security forces, or almost non-existent. Hence the implementation by the FES of the project "New Approaches to Collective Security" to better understand the conflict situations that intertwine, to understand their dynamics of functioning and how communities act according to their interests in a context of asymmetric threats to bring new knowledge on the best way to achieve collective and sustainable security.

In this sense, FES PSCC has commissioned studies on "Conflicts between pastoralists and farmers in a context of asymmetric threats in Mali and Burkina Faso" and "Connections between Jihadist groups and smuggling and illegal trafficking rings in the Sahel". Thus, the results of these studies were presented to the various actors for a greater appropriation of security threats in the Sahel for more appropriate and effective responses. The objective of the workshop was to present and popularize the results of the studies within a framework of exchanges bringing together specialists, researchers, civil society organizations, State authorities, sub-regional and international institutions, and technical and financial partners in order to define strategic, concrete and achievable recommendations for policy makers in the Sahel countries.

The debates made it possible to discuss and enrich the recommendations of the studies with a view to their effective implementation in the short, medium and long term by the FES and the actors concerned (State authorities, ECOWAS, technical and financial partners, United Nations). To this end, discussions revealed that several initiatives are underway at the State, NGO and research institute levels to curb agro-pastoral conflicts and curb the spread of terrorism in the Sahel and West Africa.

The discussions resulted, among other things, in the following proposals:

The participation of diplomatic representations, state actors, research institutes, international organizations and civil society and academics, demonstrates the interest that has aroused in the organization of this activity by the PSCC. The discussions resulted in concrete and inclusive proposals, the implementation of which requires collaboration between the various stakeholders (States, populations, UN, ECOWAS, ECOWAS, FES, CSOs, PTF), for more efficiency and effectiveness in the resolution of agro-pastoral conflicts and the fight against terrorism and organized crime networks. In line with this logic, PSCC FES intends to establish and support the initiative of a permanent strategic exchange framework composed of international organizations, civil society, the Senegalese State and technical and financial partners.