On 29 November 2018, the FES PSCC met with students from the University Cheikh Anta DIOP to discuss the opportunities and risks of mediation as a means of conflict management in West Africa. 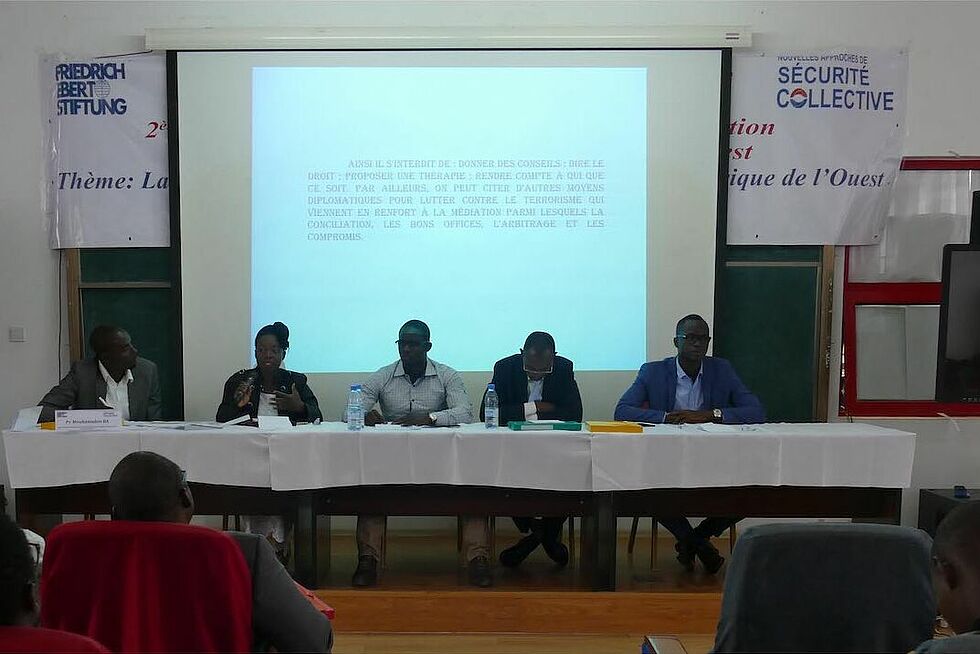 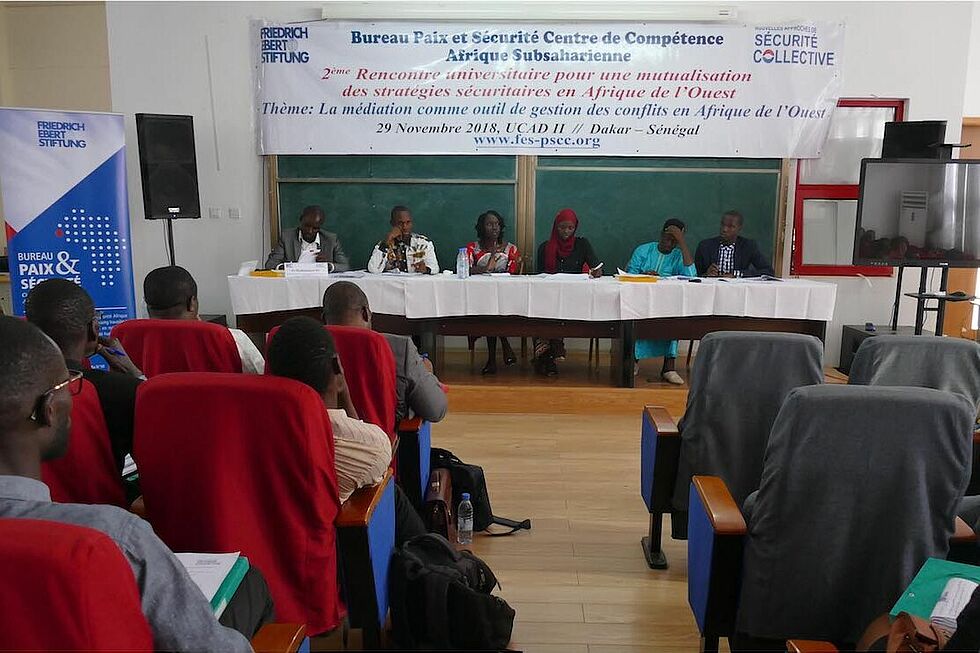 There have been multiple bloody conflicts throughout West Africa’s history. To decrease the suffering, new methods of dispute resolution emerged, and states had the choice between several diplomatic methods of settlement. Amongst other tools, mediation as a form of diplomatic settlement procedure was used to de-escalate conflicts with other states or groups. Has the use of this tool been successful in past conflicts, and is it still a useful means of conflict management? What are the factors that determine the success of mediation efforts? Should one try to mediate between everybody, even including terrorist groups?

To discuss such questions, the Peace and Security Centre of Competence Sub-Saharan Africa of the Friedrich Ebert Stiftung (FES PSCC) and the Faculty of Juridical and Political Sciences of the University Cheikh Anta DIOP (UCAD) in Dakar jointly organised a meeting on 29 November 2018. Focussing on “Mediation as a means of conflict management in West Africa”, Master students of “International Relations Studies and Practice” presented their research.

After introductory talks given by Holger GRIMM, the director of the FES PSCC, and Pr. Mamadou Yaya DIALLO, the coordinator of the Master course International Relations, Pr. Vincent ZAKANE from the University Ouaga 2 in Burkina Faso framed the topic. He stressed that mediation is embedded in African culture and is crucial for reducing tensions and their negative side-effects. To be successful, he recommended to include women, youth and other often underrepresented groups in the mediation efforts. Afterwards, the students held their presentations on the following topics:

After each presentation, the audience and the respective presentation group engaged in discussions about the respective topic and elaborated on the opportunities and chances associated i.e. with mediation as a means of reducing the threat stemming from terrorist groups. The students agreed that while mediation is now recognized as a preferred means of conflict prevention and de-escalation in Africa, it is far from being a guarantee of success in the resolution of African conflicts. Rather, its success depends heavily on i.e. the conflict parties involved and their respective interests, and the characteristics of the respective mediator.

The students suggested that the likelihood of mediation being successful are positively impacted when there is an objective, impartial and experienced mediator in place. Additionally, mediation tends to better be able to de-escalate conflicts the less intense the clashes are and the easier it is to align the different interests of all parties. Above all, the students stressed that seeking dialogue with conflicting parties is rooted in African culture, which makes it a powerful domestic solution for conflict resolution.

This was the second workshop of this kind. We enjoyed the exchange with the students very much and would like to thank the students for their hard work and motivation throughout the workshops. It was a pleasure working with you!